It’s Father’s Day in Australia. I wrote this to honour my larger-than-life dad, Chellie J. Sundram. He passed away twenty-seven years ago.

My father loved gadgets. His home office had every gizmo and gadget he could lay his hands on – in duplicate. Two personal computers (when they were still relatively unusual in anyone’s office, home or otherwise), two photocopiers (in case one broke down), and lots and lots of cameras. I counted about thirty cameras in his cupboard when he died. And he had given away many more than that.

My childhood outings with Pa involved hanging out with him at his favourite photography shop, Ruby Photo. There he would happily sit at the glass-topped counter, being plied with his favourite fizzy soft-drink (ginger beer), discussing his favourite subject, cameras.

The staff loved him and treated him like royalty. This was partly because he was probably their best client, partly because anyone with “Dr” as their title were afforded much better treatment than anyone else, and mostly because he knew each of them by name and took a keen interest in their lives.

Dispensing advice on education and relationships while absorbing as much information on the latest model Nikon or Olympus or Canon he could, Pa was in his element. There was no Mum around to look disapprovingly at his choice of diabetes-inducing beverage, and no one to raise an eyebrow at his expensive purchases.

Pa was a dental surgeon, but when he talked about cameras, he was as excited as he was when he talked about teeth and gums. (I kind of understood his love of cameras, but I used to wonder at how such an unpleasant part of the body – wet and smelly and prone to inflammation – could be such a source of endless fascination to anyone!)

My mum was a gifted child photographer, and it was Pa who taught her everything she knew about photography. The darkroom he built her helped foster her skills, until her artistry with images overtook his own. For Pa, I think it was the technology that absorbed his interest; for mum, it was the art. And yet, he was also very well versed in the art of photography.

The only lesson I clearly remember him giving me was in photography. It started simply – how to take a proper photograph. It was the seventies, I must have been about 8 years old. We were driving on the far side of the island of Penang, where we lived. The beach was close by, and he stopped the car quite suddenly. Telling me to where to stand, he handed me his precious camera. It would probably have been a 35mm Canon film camera, as digital was still more than twenty years away. Then he showed me how to hold it, how to focus, and where to click.

It was simply thrilling.

Just a few years later, things got really interesting. He felt it was time I learned how to load film into a camera correctly, and shortly after, how to capture the perfect portrait. It had to be backlit, and framed just so, with the subject’s body angled slightly away from the camera, eyes looking at the lens. The secrets of how to choose the right exposure, use the light meter and choose the perfect speed of film were expounded in detail by Pa.

Given I’m one of the most untechnical people on the planet, and that I was rather afraid of my father, it’s a marvel that I took any of this in. It’s even more of a marvel that I really rather enjoyed it.

I’d like to think he noticed that I was the only one of his daughters who took an interest in his passion. That maybe it made him especially patient with me.

Whatever the reason, from that day on the side of the road in Penang, to the day he presented me with my first camera as a young teenager, to this day, I’ve been fascinated by visual imagery.

Throughout the unravelling of my complex relationship with my father, it has been a thread that has bound us across time and generations … linking even my daughter to her grandfather. Mary has become a skilled, world-class photographer in her own right, the only one of his grandchildren to adopt his passion.

My father was a dentist, a speaker, a consultant to the W.H.O., and member of the Baha’i Continental Board of Counsellors. He wasn’t a professional artist. And yet, he used his creativity as a tool to enhance every undertaking, seamlessly weaving art, design and beauty into every endeavour.

Never mind the paintings, ceramics, jewellery-making, massive wall murals or photography. He applied his creativity with equal fervour to the simple layout of a letter or report, to the making of a denture, and to his unique approach to problem-solving.

My father never struck me as a ‘spiritual’ man in the traditional sense of the word – I couldn’t see past his mood swings and volatile temper to recognise his no doubt many spiritual qualities.

But the creative impulse, I have come to believe, is like a direct conduit to the Divine. When I am painting or writing or teaching, Creativity is a sacred, unending well, filling me with courage, giving me purpose, teaching me life’s lessons.

Perhaps it was this way too, for my father.

“I rejoice to hear that thou takest pains with thine art, for in this wonderful new age, art is worship. The more thou strive to perfect it, the closer wilt thou come to God. What bestowal could be greater than this, that one’s art should be even as the act of worshipping the Lord? That is to say, when thy fingers grasp the paint brush, it is as if thou wert at prayer in the Temple.” – ‘Abdu’l-Baha 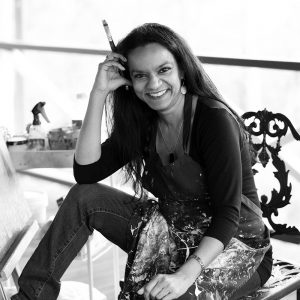 Hi, I’m Malini, artist, writer and teacher.
Thank you for reading my story!
I’d love to meet you in my home studio
in Perth, Western Australia,
where we will make art together
amongst eucalyptus trees and bird-song!
More on my art classes here.
www.maliniparker.com