Two months ago, I lost someone precious. I’d like to tell you about her.

When I was born, I was the youngest in the family by a LONG way. I had three older sisters, to whom I was a novelty, a plaything, a cute little baby… but that cuteness eventually wore off and I soon morphed into an annoying child that followed them around everywhere.

So, they responded, as big sisters can do, with taunts and jeers, and all sorts of nastiness, to which I would respond – “I’ll run away from home and live with Aunty BETTY!!” After all, everyone needs a Life Plan, right?

There was literally no downside to this plan – the Fernandez family – Aunty Betty, Uncle Tony, and my cousins, Shirin and Zeena – had a very beautiful home. It was 70s chic, ultra modern, with shiny polished floors, and everything was ordered and cool. Aunty Betty was sophisticated and attractive, while Uncle Tony cut a striking figure as the Chief of Police and yet he was very, very kind. He was in fact my mum’s first cousin, and Aunty Betty was not an aunt at all and related us only by marriage. But she was my Aunty Betty.

Growing up in Penang, our home was a centre of CONSTANT activity, events, people and general comings and goings. My mother, bless her, was a busy woman who seemed to live two lives in one lifetime. And she did EVERYTHING at the last minute, so she was constantly late for any and all events in BOTH those lifetimes. And it also meant there was little or no structure or routine in my life (especially as being the last in the line, the novelty of parenthood had certainly worn off by the time I came along!)

Not so in Aunty Betty’s house. I spent nearly every school holiday with the Fernandez family. I loved it. Mealtimes were regular, (this was new to me) and we ate at the table together at every meal, (also a novelty). Aunty Betty was kind, but I couldn’t get away with anything. So if I didn’t like something that was served, I sat there until I finished it. While I didn’t enjoy having to eat spinach, I think my child-heart really loved the clear boundaries their family structure provided.

Running away from home and living with them was perfect. I would still see my mum all the time cos my mum and Aunty Betty were best friends, and I’d have built-in playmates in my cousins, Shirin and Zeena, instead of my Very Mean Big Sisters (who, by the way, turned out to be Very Nice Sisters later on!). Uncle Tony would take us to the movies and to A&W’s to eat hot dogs.

It was a near flawless plan.

The one problem was they lived in Petaling Jaya which was 400 km away from Penang, and while I had mastered wearing really really long socks with frilly skirts, I hadn’t yet worked out how to take the ferry from the island to the mainland of Malaysia, and do the train journey across half the peninsula on my own.

I was after all only eight years old. Fast forward ten years, and I’ve just transferred to the University of Western Australia to enter second year of my Bachelor of Science degree. It was my first trip to Australia, and I had come to live with Aunty Betty.

My cousin Zeena has just picked me up from the airport and is pulling into the driveway of their home in Como, Western Australia.  I can smell the eucalyptus trees in her front garden. The air is crisp and clear and the stunning vast Australian sky seems magical. In that moment, Perth instantly becomes my forever home. And Aunty Betty’s home became, yet again, my sanctuary.

Turns out, I did manage to fulfill my Life Plan formulated at age eight. Sometimes, these things just take time 🙂

My new life in Australia with Aunty Betty wasn’t quite the party I had imagined as an 8 year old.

For a start, each of us, my cousins Shirin and Zeena and me, had ROLES and CHORES, and things happened according to a Plan. This was eye-opening. I had never done a chore in my life, nor had I been part of a household with such seamless systems in place.

There were also specific days set aside for grocery shopping, floor mopping, clothes washing, and the three of us girls had assigned tasks … It was like I had entered a bizarro, but comforting world of order and systems.

Aunty Betty was probably just trying her best to manage a group of hormonal teenagers, (including the “new daughter” who didn’t know how to use a washing machine), but what she actually did, was teach me about discipline, routine and structure and how it can, when used well, help create inner and outer peace.

(Marie Kondo took it to another level for me, but it all began with Aunty Betty!)

One of her other gifts to me was to model the power of friendship.

For a woman of commanding presence, Aunty Betty had a surprisingly girlish giggle. And my mother had a belly laugh that was infectious and memorable. When they were together – these two – the joy, love and laughter that radiated from them is one of the most cherished memories of my childhood. Mum was her happiest when they were together. Seeing one’s mother experience true friendship and joy is a powerful thing.  I think it teaches children so much more than we imagine. The friendship between Aunty Betty and my mum, Shantha was legendary. They were separated by more than a decade in age, ALWAYS by hundreds or thousands of kilometres, but their souls were connected in ways that were mysterious and powerful. The love between them created a synergy that was keenly felt by my sisters and me.

It modelled for me the power of true friendship and connection. To this day, what I treasure most in my world are the ties of friendship that have held me together when life has threatened to unravel me.

I feel fortunate to have had Aunty Betty’s influence in my life, especially during those formative years of early childhood and then again as a teenager. The sanctuary she provided, the gifts of structure and routine, and the model of true friendship she created with my mother, have been helped build the sturdier, more resilient parts of my complex inner life.

I wish I had noticed more of these pieces before she died. It is only in retrospect that the puzzle pieces of childhood anxieties and teenage traumas found a peaceful place in the picture of life … and my understanding of Aunty Betty’s role: She helped make the pieces fit.

I hope you had someone like that in your life. And if you didn’t, perhaps you are now someone else’s ‘Aunty Betty’.

We all need one!

PS  Thank you for reading my post. Let’s reminisce together – you can do that in the comments section below. I’d love to hear from you and I read and reply everyone!

PPS  If you’d like to work with me and make some art in my peaceful and lovely Perth Hills studio, my classes are listed here. 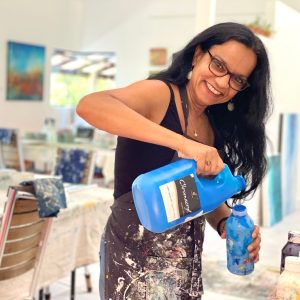