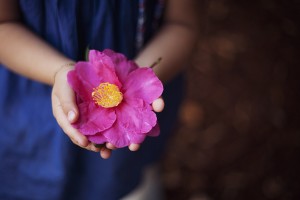 Many years ago I was at a seminar at the Vancouver Arts Centre. I was still an art student, not at all sure of who or how I wanted to ‘be’ in the bewildering art world. I don’t even remember what the seminar was about. But the lady in charge was to become a Very Significant Person in my life. Her name was Trina Butko and she was one of those people who light up a room when they walk into it. With her, it felt like there were possibilities lurking just around the corner.

I don’t recall what we were talking about that day when Trina suddenly said to me, “Malini, YOU should run workshops! We have Harmony Week coming up and I think you should put together a proposal for it, and run some workshops in schools.”

“What do you mean, run a workshop? I couldn’t possibly. I’ve never done it before! I don’t know how.”

Trina replied with her engaging, impossible-to-say-no-to smile, “Just go for it. You’re perfect for this. Write up a proposal, and I’ll have a look at it. I think you’ll be brilliant! Do it.” And she walked off, leaving me stunned.

You know how sometimes things just feel ‘right’? Well this SO didn’t! In fact I actually felt a bit sick at the thought. I wondered if she was a little nuts. Why was she so sure about this? I wasn’t even a little sure.

I wrote the proposal, showed up at the schools, ran the workshops. It was a scary, fantastic, eye-opening experience – simultaneously terrifying and wonderful. And things have never been quite the same since.

I don’t teach children anymore. I don’t run workshops in schools. I haven’t written any more proposals. But I started something that changed the course of my life, and it was all because Trina believed in me. So I’ve just realised a Very Important Thing.

It’s all very fine and handy to believe in oneself. But when its early days and you don’t really have a clue, and you’re afraid and you can’t see the possibilities within … it’s really ok to just believe in someone else’s belief in you!

Have you ever believed in someone else’s belief in you?