I’m walking with bare feet on very soft cool grass. The sun feels warm and so, so bright, almost Australian. Except when I look up I see soaring snow-capped mountains plunging into a massive lake. And there are tulips in flower-boxes, and people chattering in French.

How did this happen? It’s Mary’s 23rd birthday and we have spent the day in a beautiful French town of Annecy with its canals and 400 year old buildings. There is a huge green park, with hundreds of people frolicking in the sunshine by the blue mountain-rimmed lake. Children, families, lovers, dogs, shirtless young men kicking a ball around, young girls sitting in circles on the grass, playing cards. People reading, sunbathing on deck chairs. I counted a total of about 3 people on mobile phones. And I had to look very hard to find them.

It’s a warm spring day in Annecy and the happiness-energy coming off the people around me is palpable. It’s making my head buzz and my heart sing.

When I wrote that on Mary’s birthday, April 22, we were on the last leg of our epic European adventure. Mary and I had set off across the world, in pursuit of awe, to honour and commemorate the first anniversary of my late husband’s passing. We had planned to spend a week on Lake Como in Northern Italy and a week in Switzerland, with a little bit of London on either end to break the long journey to and from home in Australia. France was an unexpected bonus.

And what an adventure it was… for example, that day we spent in the French town of Annecy (pronounced ‘Ahn-see’) was made possible because I drove there. To France. From Switzerland. (In Australia, it is NOT POSSIBLE to drive to another country. In fact, living in Perth, one has to drive for 4 days just to get to Melbourne).

So with Mary navigating, on that day in April, I drove us from Prangins, the little Swiss village we were staying in, to Nyon, past Geneva, across to Annecy in France. It was about a 4 hour round trip. But let’s just break that down into teeny tiny parts.

Firstly, let me repeat this incredible fact: I drove. In Europe. On the wrong side of the road (in Australia we drive on the left, in Europe, they drive on the right). A car I’d never driven before. (Well, it was my friend’s Mercedez, so I wasn’t exactly roughing it, but still). We had to get petrol. Find a station. Navigate roundabouts. A LOT OF ROUNDABOUTS. And Left turns. Geneva. And freeways, take the correct exits, do the toll booths, (have the right currency), go through little villages, many many more roundabouts, find a parking spot in Annecy, (which was quite hard on a warm spring day near a park in paradise, as everyone else was trying to do the same). Order food in a French restaurant and avoid getting anything with offal or amphibians in it. And then do all of that in reverse and find our way back to the village of Prangins in Switzerland. (AND … our Google maps didn’t work in France!).

Of all the scary things I’ve done, this was possibly the scariest of all.

But when I was still undecided, sitting in my friend’s house in Switzerland, contemplating her kind offer of a car, knowing Mary really wanted to spend her birthday in France, wondering if I could do this, IF I should do this, I heard Greg’s voice urging me on. Clear as a bell.

“Really Gregory? But what if I kill us both? On her birthday?”

So I did. It may not seem like much to you, but it was a Big Deal to me. You see, I have trouble reversing things in my head. Rotating things in 3D in my mind. I had imagined that driving in Europe with everything in reverse would be totally impossible for me. If Greg were alive he’d be the one doing it, no question. But the prohibitive cost of rail travel in Switzerland, combined with the willingness of my generous host to lend me her car, and mostly the sheer challenge of doing this – the symbolism of it – somehow got the better of me and I decided that I HAD TO DO IT. On Mary’s birthday, she would have her day in France, dammit! And she would see her mum embrace her fears and do what she thought previously impossible.

So we started off with a smiling photo, one of those Facebook shiney images that didn’t show the fear I felt, and headed off. 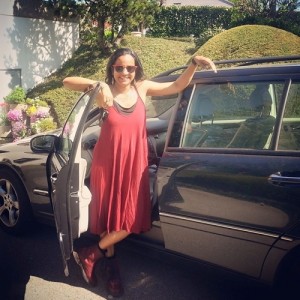 There were some tense moments in the beginning, but mostly we had fun. And I could not have done it without Mary beside me to navigate, so the total teamwork became a beautiful metaphor for our lives. We laughed a whole lot and decided we were … well… Awesome. Later on when we got back safely to Switzerland, I told Mary that it was the most terrifying thing I had done in a very long time. That I didn’t tell her how scared I was. And she said,

“Mum, I knew how scared you were, you didn’t need to tell me.”

Darn. Mary’s emotional intelligence makes it almost impossible for me to con her into believing I’m wild and fearless. She knows I’m basically tame and scared shitless.

Our whole journey – four countries, many mountains, stunning lakes, tiny hamlets, heart-melting gardens, ancient vistas, friendships made, friendships renewed – was wildly, extraordinarily beautiful. So much awe and wonder. But that drive to Annecy on Mary’s birthday, our gorgeous day there, and the drive home – that kind of captured the spirit of the whole adventure.

Just as it took a big dollop of courage to make that drive to France, Mary and I had to use a bucket load of bravery just to set off from home and do this journey for Greg. We were rewarded in ways we never imagined. As Mary exclaimed at one point, “Mum, this trip has totally altered my world-view.” And in many ways, I felt the same. It may have been whilst we were lugging suitcases onto a train in Italy, (I may or may not have been weeping from the effort). Or it may have been while struggling to take in the unimaginable beauty of water turning into mist as it cascaded out of a mountain in Switzerland. But something has altered.

Which brings me to this moment. One year ago on May 16th, Greg Parker, my husband of 28 years, left my side and started his own adventure in the World of Mysteries. I had gotten used to having him next to me for more than half my life. His death, though not unexpected, as he’d been sick for four years, plunged me into an abyss of grief.

Grief is a singular emotion. It leaves little room for anything else. But removing most of the other confusing emotions one feels in normal life also gave me a kind of clarity that I had never experienced. And so Grief itself became an unexpected Gift.

What followed in this past year since that day has taken me completely by surprise.

I didn’t know that I would form a bond with Greg that was stronger than anything we had in our physical lives together. I didn’t know that joy and happiness can co-exist with grief. I didn’t know that the experience of bereavement is a universal one that links you with others in a unique way. That I would be the recipient of so much kindness from others. That my heart would expand to receive new friendships and love. That my students would return in droves, filling my classes with their creativity and my heart with hope. That my beautiful extended family would share my life and home. That our grief and tears and laughter and memories would mingle and make so many new memories. That Greg’s daughters would step into his humour and peculiar wisdom and zaniness and talent, so that all of his qualities would live on, long after his physical body left my side. That only a daily basis, I could feel peaceful and happy, yet strangely sad all at the same time.

That I would travel nearly 50,000km in one year, and experience more awe and wonder than my heart my could hold.

That getting more lost than I have ever been would help me find my way home.