For a very long time in my youth, I had a fantasy that I was conceived in Japan.

A brief sojourn in Japan in my early twenties for work introduced me to a country and culture that I was immediately drawn to. That’s when the thought was planted in my mind … perhaps I was actually conceived in Japan, and the connection I felt was planted in utero! It would explain so much – my instant affinity with the art, language and culture, my ability to quickly learn a foreign language I had no previous exposure to, my instant obsession with miso soup, soft tofu and sticky rice, my desire to upend my life and move there! My parents had lived in Japan for a whole year before I was born … surely it just explained all of it, and how mysterious and wonderful if it were true!

However, my mum did live by a Japanese concept, first named by the author Haruki Murakami, called Shokakkou. It means to enjoy “small but certain happiness”.

Why should we care about Shokakkou? Good question. Well, if you’re a person who follows what’s ‘trending’… it’s related to the Korean concept of Sohwakhaeng, which took the Twitter world by storm a few years ago. (So I’m told. I actually don’t have a Twitter account.)

And we should all care because it might just be the secret to a good life. Noticing and feeling ‘small but certain happiness’ is all about taking great pleasure in that first sip of hot tea on a cold day. A soft soft blanket. A cat purring on your lap. Your dog’s disproportionate delight in your appearance.

When I first heard of this concept of Shokakkou and Sohwakhaeng, I thought, well, my mum invented that concept, she just didn’t tweet about it. And I felt such regret that I responded to it with eye rolls instead of adopting it as a practice to banish discontent from my turmoil-ridden youth. Instead of living on a diet of existential angst, I could have been delighting in Shokakkou and been a happy person.

Mum was a splendid soul – she radiated love, generosity, fun and laughter. But it wasn’t an easy life. She lived through World War II, their family home in Singapore taking a direct hit. Then the Japanese occupation of Singapore. After the war, she began a long and productive marriage to a very complicated man. She raised four children. She ran a business. She managed staff. She edited a news magazine with a world-wide readership (and she couldn’t type, or organise her desk!). She drove a car on Penang’s slightly wild streets when she had NO SENSE OF DIRECTION at all (before Google maps). She was an accomplished public speaker while also being an accomplished procrastinator who suffered from terrible stage-fright … the list goes on.

Mum had a few simple and powerful tools that she used to navigate all the complexity: An intensely curious mind, a humility about her accomplishments, reliance on prayer, a deep-seated trust that no matter how bad things get, everything changes, a thankful and generous personality, the creation of beautiful natural spaces with flowers, and most of all, Shokakkou.

“Oh Malini! Isn’t this a BEEAAAUTIFUL leaf?!!” she would exclaim, picking up a leaf off the ground. I would reply, “Sure mum, it’s very nice,” wondering what on earth she could see in that very ordinary leaf that I couldn’t. (Eye roll.)

‘Mum has such a ridiculously simple outlook on life. I’m more like Pa – complex and angsty,’ was the internal self-talk of my younger self, while vaguely being aware that mum might be using a superpower that I was yet to grasp or understand.

Now when I look back, I’m not sure that I was really that complex or interesting. After all, science now recognises that remembering threats and hazards was more important to the survival of early humans than noticing good times. It became hard-wired into our brains in order for our species to survive, and is called our negativity bias. Given I had plenty of it, it turns out I was just being a regular kid.

But somehow mum’s brain found a way to override millions of years of evolution and pick Shokakkou instead of Negativity as her default bias.

Mum loved beautiful gardens. We had a large property in my childhood home in Penang, covered in tropical plants that are impossible to grow here in our dry climate in Perth.

She was a lover of gardens but I don’t recall ever seeing her hands in the dirt (we share that in common!). Instead, I have fond memories of her daily instructions to our patient, illiterate gardener in a mixture of languages. With the creative use of fragments of Malay, bits of broken Tamil, occasional English words that he definitely didn’t understand, plenty of hand gestures and laughter … Mum somehow managed to co-create a magnificent garden with this hapless man! Everyone who worked for mum adored her, so I’m sure that adoration played a part in creating and maintaining that garden.

I wish I had appreciated it more. But I was a newbie at life and didn’t know any different. I’d give almost anything now for the dancing yellow daisies that perpetually lined our driveway, the rolling green lawns that blanketed the tiered ground, the giant ferns, the trees with pendulous yellow flowers, the cascading bougainvillea, and the pergola covered with masses of upside down pink, red and maroon fragrant honeysuckle, aptly called ‘drunken sailor’.

It’s been many decades since my eye-rolling days. Mum is long gone, and I miss her terribly. I wish I was more like her. But perhaps I have embraced one tiny part of her superpower, at least in the leaf department, I’ve just given it a different take. I’ve been finding ways to use leaf shapes in paintings for as long as I’ve been making art. And the year after she died, I bought a house in a forest! I wonder if mum laughed, wherever she was in that World of Mysteries.

It would have been Mum’s 96th birthday today, April 6th. For a short while, strolling through the images in my mind of Mum’s superpowers has swept aside my brain’s negativity bias.

(scroll down for lovely images of my mum and some surprises for her birthday!) PS In mum’s memory, I have two things for you:

1. A tribute to mum’s love of leaves and her loving-kindness and generosity, I’ve created a downloadable high res print for you as a gift, featuring the words that mum lived by, “Do not be content with showing friendship in words alone, let your heart burn with loving kindness for all who may cross your path.” 2. If you’d like to create some art that celebrates family (whatever that means for you), you might be interested in FAMILY TIES, my new workshop which is soon to open for enrolment. The last time I announced a brand new workshop, it booked out in a few hours. So if you’re interested and don’t want to miss out, it’s worth being on this ‘first notification list” which doesn’t oblige you to enrol, it just means you have the opportunity to, before everyone else does! Just email me info@maliniparker.com “yes, please add me to the waitlist for early notification of your new workshop, Family Ties”.

Here are some images of my own Family Ties paintings: 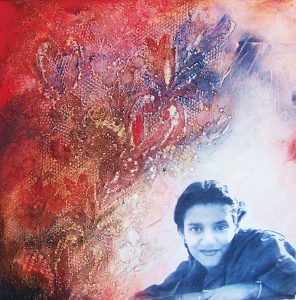