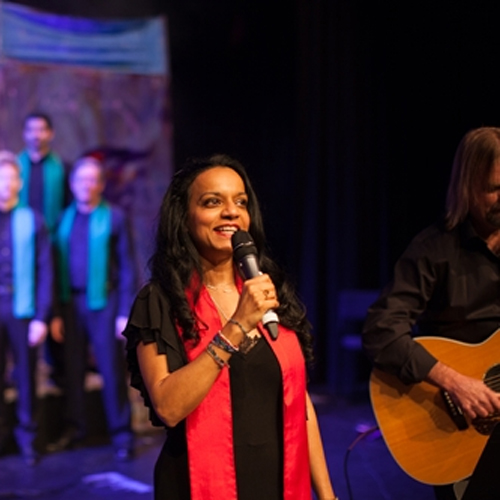 This is the story of how I found my courage while I was taking shower.

You probably know me as an artist. But it may surprise you that for most of my life, a far longer time than I’ve been a painter, I’ve identified myself as a singer. I have been accustomed to the stage since I was nine years old, and when Greg and I married, nearly 30 years ago, he was an accomplished folk singer and composer. And we had already made one album together that had encircled the globe, a beautiful little audiocassette called Journey’s End that was largely his original compositions about love and the mysteries of life.

I have a pleasant voice, but I am not ‘musically gifted’, and could never even approach Greg’s genius. He wasn’t actually formally trained but was pitch perfect. He could tell when I was just a teeny weeny bit off key. And he never hesitated to correct me – a trait that was quite annoying, but also reassuring, as I came to rely on his brilliance to somehow make up for my mediocrity. The good thing is that we both agreed we sounded better together than either of us did apart, it was like our voices were meant to blend in harmony. And audiences seemed to agree.

So. What all this got to do with that courage I found in the shower?

My Gregory passed away over a year ago. Two weeks ago, I directed and staged a memorial concert for him.  It was called From Our Hearts to Yours. Two standing ovations. 700 people. Wonderful performers. Amazing soloists.

And me. Amidst all the lovely choral music and brilliant soloists, there was me … with one small solo in the show.

And I nearly didn’t make it. You see, I didn’t have a problem staging the show. I have produced most of Greg’s big shows and many others, and I knew I could do this one. What I wasn’t sure of was my own voice. Greg used to say that the human voice is like a muscle. You don’t use it, you lose it. And he repeatedly reminded me in the years before he died that I hadn’t been singing consistently… and it showed.

The song I was supposed to sing was Journey’s End. He wrote it over thirty years ago, and he wrote it for me to sing. It was about longing and loss and the mystery of suffering. It was a strangely prophetic song, like his soul knew he would die young. I felt compelled to sing it at his memorial concert, but I didn’t feel like my voice was up to it. And every time I tried, my voice felt incomplete without his voice accompanying me.

One evening, some weeks before Opening Night and after some pretty lousy rehearsals, amidst tears and insecurity and fear, I came to what I thought was an epiphany. It was time, I thought.

“Really, Malini you haven’t been a singer for years.” I told myself. “You’re just pretending now. Time to pass the baton on, and do it gracefully. Nothing wrong with that. Accept that others can do this much better than you can, and you just don’t cut it as a singer without Greg. It’s not cowardice. It’s acceptance.”

I fell asleep peacefully and awoke the next morning free of doubt and uncertainty, secure in the decision that I knew what must be done. I would hand over the song to one of the other female soloists in the show. Beautiful young women, amazing voices. Yep. This was no time for hanging on to the past.

I got into the shower, and, soothed by the warm water on my tired body, I started telling Greg all about this.

I gave him the full spiel about accepting that others would do this song much better than I would.

“So I’ve come to the realisation that it’s time to pass the baton on, Gregory. I acknowledge that I’m not the singer I used to be. I’m at peace with that.”

I detailed my whole epiphany to him in its entirety and felt rather… well, grown up.

“Sing the damn song, ya wuss!”

It was Greg. Clear as a bell, speaking in his voice in my head. He wasn’t buying my epiphany.

And then, all of a sudden a memory from my childhood flooded my brain, as if it happened 5 minutes ago. I was 13 or 14 years old and at a public swimming pool with my friends. I wasn’t a strong swimmer, in fact I could barely swim but I learned that day that if you hold your nose and jump in feet first, the water stays out of your lungs and it pushes you back up again.

Memories of courage and fear mingled as I saw my teen self jumping off the side of the pool into the water repeatedly, each time trusting that the water would push me back up. Then I was on the diving board, and then… the high diving board. Terrified. Looking down into the blue waters of the swimming pool, so far, far away, just beyond my toes at the edge of the board. Knowing I wasn’t any good at swimming, but trusting in the new found knowledge that if you jump in, the water pushes you back up.

The realisation that I had used enormous courage as a wimpy teenager was powerful and life-affirming. I had never viewed my adolescence through this lens. And yet, if I had showed courage then it was clear that I needed to do it again.

At the next rehearsal, when it was my turn to sing, I stepped up to the front, looked everyone in the eye, took a deep breath and said to myself, “Jump, and trust the water will push you back up again.”

I was never again plagued by doubt or insecurity. Actually it was as if I forgot myself completely. I forgot myself as a single being who makes mistakes and worries about wrong notes. I was part of a bigger organism, the cast and crew, and our collective courage, sacrifice, trust and LOVE made us strong, beautiful, whole. That’s what the audience sees and feels.

On Opening Night, I barely remember singing my song. All I can remember is the feeling of intense love and gratitude I had throughout the event. For my life with Greg, for his music, for his legacy, for his stunning daughters, for all the people who loved and remembered him. And for the awesome people on stage who gave up their time and talents to share a message of love with over 700 people through the exquisite harmonies he created.

From Our Hearts To Yours – The Greg Parker Memorial Concert.

It was truly a night to remember.

“What a concert! I can’t tell you how much we just loved sitting in the energy of all the beautiful music – how our spirits were nourished and gladdened by it…..and how wonderful it all was. Well done a thousand times over my dear – you really pulled off something so special, so honoring of Greg and such a gift to all of us who were fortunate enough to be there.
Our hearts are still resounding and full from it, and will be for some time.”
– D. Sounness, a beautiful member of the audience. 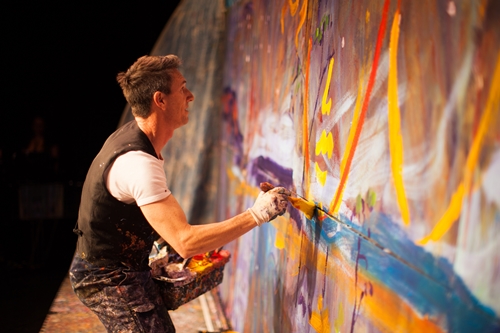 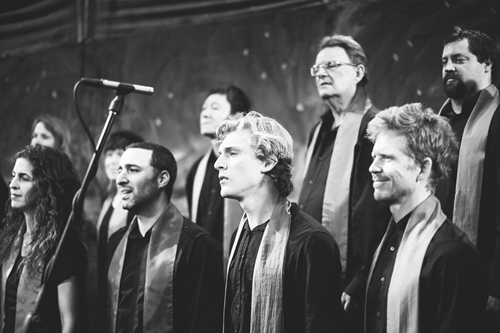 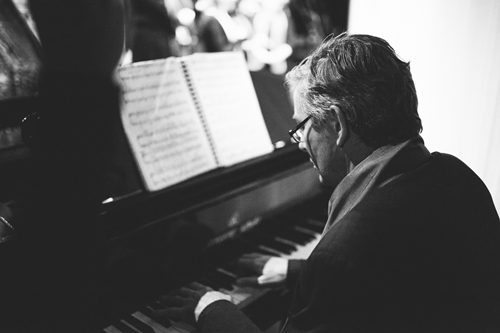 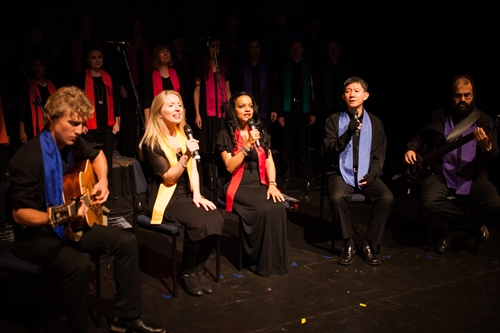 The proceeds from this concert are being used to fund an Education Foundation for underprivileged children in Indonesia, which I am setting up in Greg’s memory. If you’d like to be involved, don’t hesitate to email me.